Woodside, Queens where Calvary Cemetery is located is 1 hour and 30 minutes from my house.  But after several years of research, on a beautiful spring day here yesterday, I knew it was the right day to go there to find our great, grandparents.

The woman at the office said four people are buried in that plot.  And most of us heard stories from our parents that the four people buried there are:

Raymond Valerio – our uncle who died at age 5

Peter Mingoia – our great, cousin who died as a child also

Here is the information in case you want to visit:

It’s great with all the 5’s and 1’s.  What an interesting set of numbers

There was a map of the cemetery which showed where section 55 was, but coming up to the first intersection in the cemetery, there weren’t any street signs.  So, from my memory I made the first left, and then the first right.  And we found section 45.  Then I kept driving and I was right there.  I saw section 55 Range 55 M15.  And I assumed if I walked M15 that the other letters would be there.  And they were there in descending order.  Walk in a straight line to J15. I just had to It’s like it was all meant to be.

I got out of my car and grabbed the carnations.  I bought four carnations, two red for our great, grandparents, and two white for the two kids.

Here is the gravestone:

I was so delighted to find the tombstone that nobody has visited in over 50 years, or longer.  I was excited to find it and I kept looking at it with the scenery all around.  It says the tombstone was erected by her children.  She was the first to die.

Here is a closer look at it: 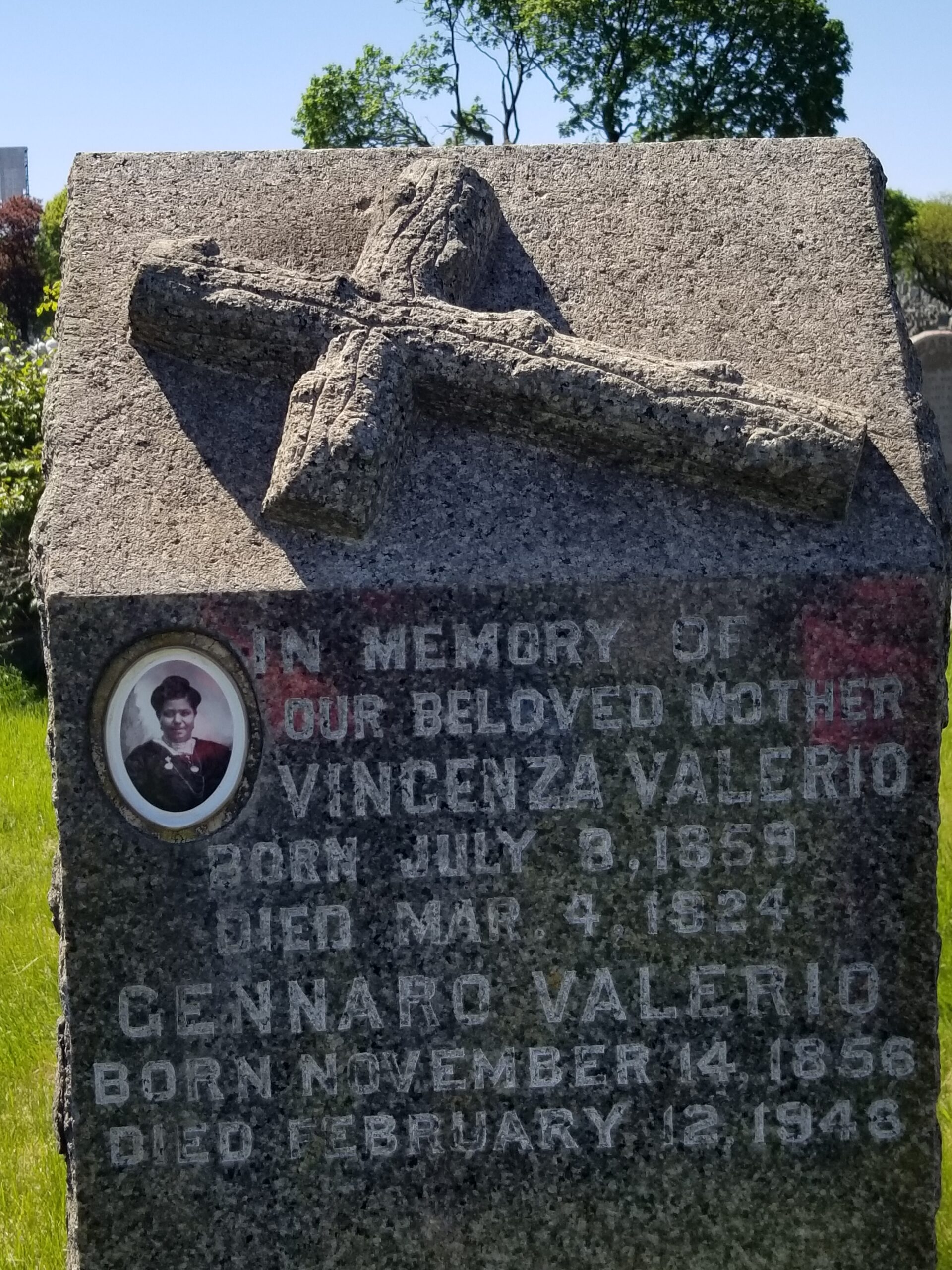 So, I walked to the back of the tombstone and here is what I saw.

I expected to see the names of the kids written behind the tombstone, but they were not.

I have come to believe that they could not afford to have their names written, but that they are still in the grave plot.

We know our uncle, Raymond Valerio aged 5 was buried in that plot, and great, Aunt Mary’s son, a Mingoia.  One of our cousins recently said that his name was Peter.  And that Peter drowned with his friend boating in The Bronx River.

That there is a mystery two tombstones away!  I explain it towards the end.

So, I placed the carnations on the grave.

The picture of our great, grandmother Vincenza that was affixed to the tombstone was in perfect condition.  You can see her clearly with no water or sun damage to her picture.  Here is a picture of her picture from the tombstone.

And here is a second picture I took:

Who does she look like? I say my sister Maryann and my brother Joe.  Those eyes are definitely in our family.

I took two pictures of myself by the tombstone, this one I was standing by the side of the grave.

I also took one kneeling down trying to make my face directly next to our great-grandmothers face as if we were taking a picture together.

Here is a view of their gravesite from different angles with different views of the Long Island Expressway south of their grave and in the distance in the north is the East River. 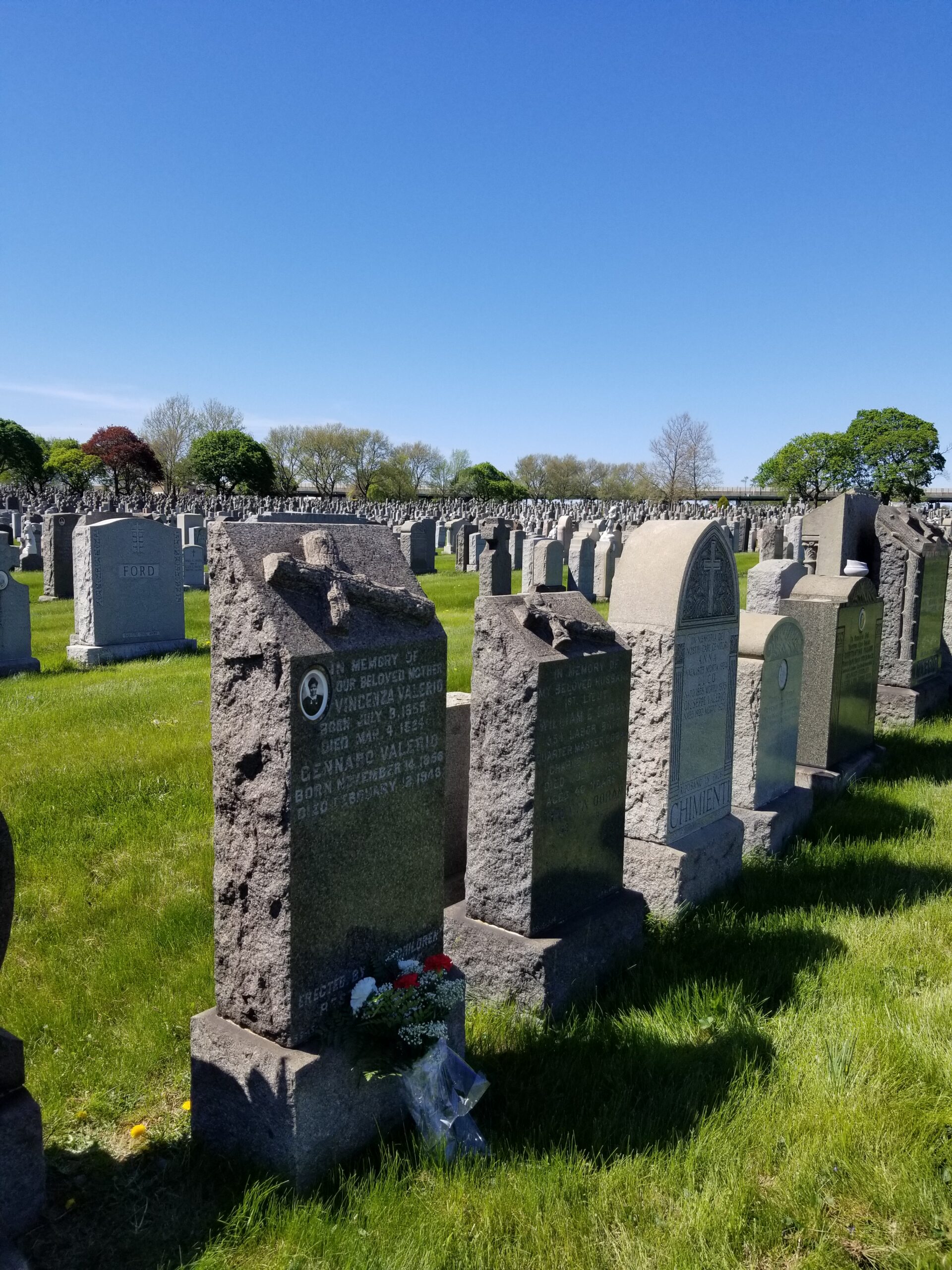 If you had an ariel view, you’d see look at their grave from this direction is the East River a few miles away

THE MYSTERY IN TOMBSTONE J13, TWO PLOTS AWAY

In this photo are three tombstones, our great-relatives tombstone is on the left, the one in the middle are people named Doran, there is no relation to us.  But, the third tombstone on the far right are related to us?  It appears so!  Look carefully at it.

Their last name is Chimienti, but the last person listed on the tombstone says Guiseppe Valerio.  His date of birth is 1920 and his death is 1925.  He was only 5-years old.

It seems pretty obviously that this child is related to us, but how? And if he died at age 5, that is the same age as our Uncle Raymond Valerio, our parents’ brother who died.  Who is this child and how is he related to us?

As I left the cemetery, I felt so good to see our relative’s gravesite.  May their spirit look after us. One day we shall be reunited with them, our grandparents, our parents, and our other loved one’s gone before us.

*If any of you have any corrections or comments, please add them comments section*