Sitting beside the club Summers and across the street from the Drift Inn, Neptunes Beach Club stood for decades as everyone’s go-to club for PAR-TAY music!  Situation right on the ocean, it had two huge outdoor bars and it played party music from the 60’s through the 2000’s. 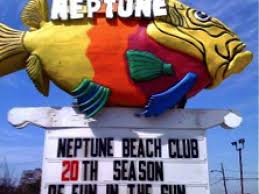 The Sign on Dune RoadIt had a reputation for being the Boardy Barn on the water.

Neptunes Beach Club has world-famous DJ’s.   They even battled the DJ’s on the Jersey shore and compiled a cd entitled Hamptons vs. Jersey Shore!

Good Loving song video and Run Around Sue song video on the huge outdoor deck 1986.   And the group Full House plays a set in 1989.

The lines of cars waiting to enter Neptunes along with other noise problems by Karen neighbors made the town of Southampton crack-down on the paradise club.

The club had gone to court several times, but alas, politics in the Hamptons killed yet another tropical nightclub on the ocean.  But not before a big legal fight.

The pleas went unheard as Neptunes Beach Club has now become a museum.  Wanna meet me at the “museum” and sneak a drink in while we silence disco the good ole’ days?